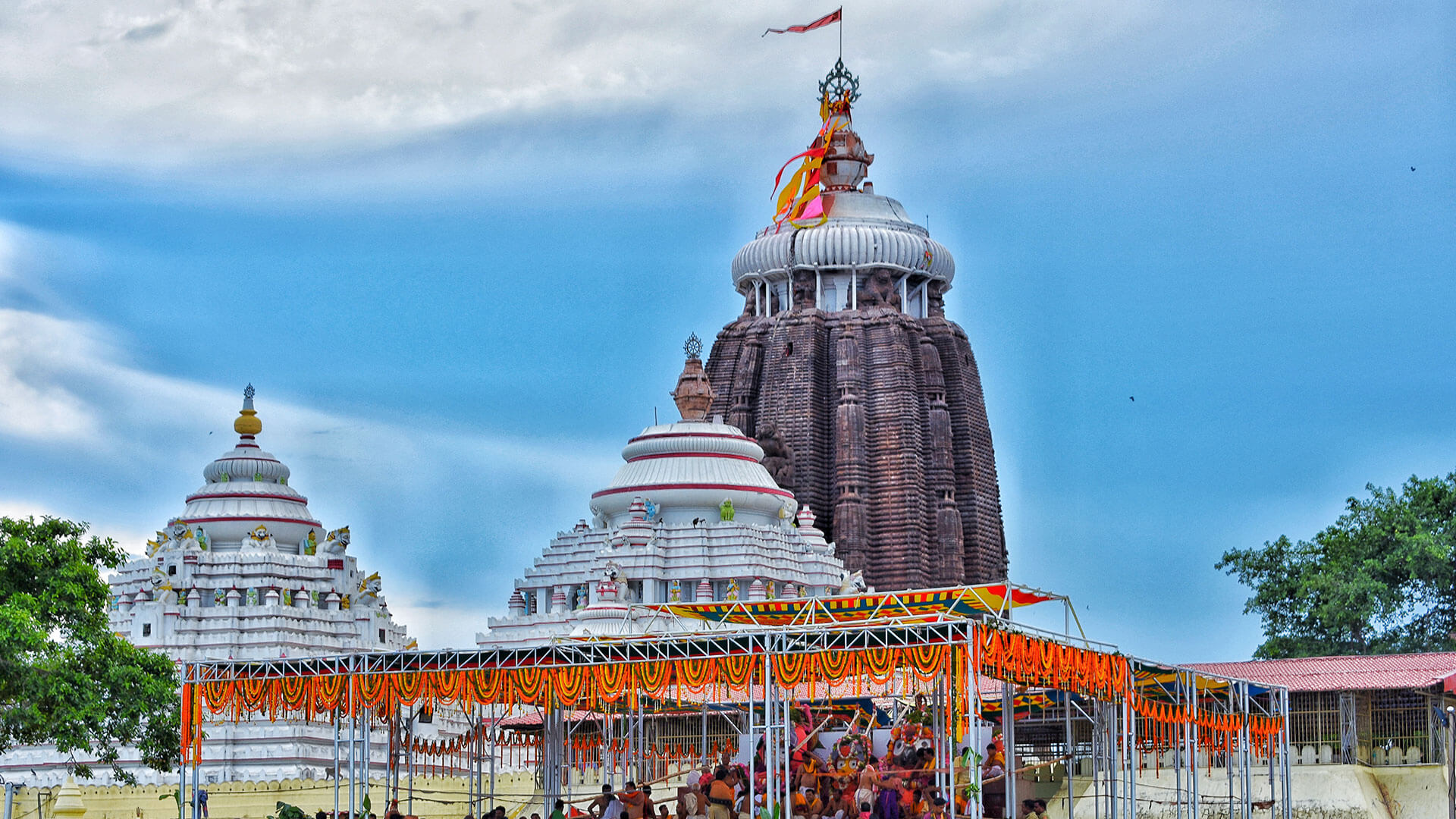 Hardly there is a person who does not know about Puri Jagannath Temple. Puri Jagannath temple is considered among the char Dham pilgrimages (Badrinath, Rameswaram, Dwarka, and Puri) in India.  From the time of its inception to date the temple has witnessed millions and billions of devotees from all over the world, and the parade of devotees becomes colossal and spectacular during Ratha Yatra or chariot festival in every year.

In 2020, the glorious and gracious Jagannath Ratha Yatra will take place on the 23rd of June (8th Aashara according to Bengali Calendar) in Puri (Odisha), Bihar, Jharkhand, West Bengal, and other parts of East India.

Name of Rathas of Jagannath, Balaram, and Shuvadra

The three giant chariots of Lord Jagannath, Balarama, and Shuvadra are made up of wood only, and no modern technology is used in this process. Even, the measurement of rathas is not taken with any tool. But, it is only the assumption, devotion, and hard work that are required to build the chariots.

Puri Jagannath temple was structured in the twelfth century during the realm of King Anantavarman Chodaganga Deva.  Though, many legends are there regarding the foundation of Puri Jagannath temple. According to Padma Purana, it was believed that King Indradyumn was a great devotee of Lord Vishnu and he was the king to build the Jaganath Temple (previously known as Shri Kshetra).

The king Indradyumn was guided to find and establish Nila Madhava in the temple.

The King sent a search team to find the idol of Nila Madhava, but there was no result. One day, King got news from one of his pursuivants (Bidyapati) about Nila Madhava who was established somewhere on Neel Parbat. Though, King Indradyumn and his team of unable to find the idol.

King got an oracle that he would find a piece of wood from the ocean nearby his province and he had to make an idol out of the wood piece. Lord Bishwakarma came in the disguise of sculptor and built the idol and since then the idol has been worshiped as Lord Jagannath, the incarnation of Lord Vishnu in Kali-yuga.

Every 12 years a piece of wood comes via ocean and the idols of Jagannath, Balaram, and Devi Shuvadra are built in the same way we find in Puri Jagannath temple. The source of the wood piece is still unknown. Devotees believe that it is all about Supreme power that rules the world and remains a mystery to the human race.

Every story of Puri temple is alluring to the devotees of Jagannath or Vishnu. There is a mystic charm that you can’t evade while standing on the premises of Jagannath temple. For 284 years consecutively, Ratha Yatra has been remained one of the magnificent events for Vishnu/Jagannath devotees to celebrate with full of enthusiasm and glory, and it will remain the same for years ahead.

However, apart from Ratha Yatra, there are some mysterious things that Puri Jagannath Temple remains the center of attraction for travelers from different parts of the globe. It is time to uncover the mysteries of Puri Jagannath temple that you probably unaware of,

We all know that a piece of cloth blows following the direction of the wind. But, the flag mounted atop of the Jagannath temple blows in opposite direction. It defies the course of science with no scientific analysis.

Even, daily a priest needs to climb the dome of the temple (which is equivalent to a 45 story building in height) to amend a new flag. The ritual has been carried out from the back 1800 years. The priest does not take any support or gear to perform the flag changing ritual. It is said, if by any change the flag changing ritual goes missed then the temple will automatically shut down for the next 18 years.

3. No Shadow of the Main Dome

The architecture of the temple was intended in a way that the temple’s dome does not provide any shadow at any point in time of a day. It is better the say that the shadow remains invisible due to the Lord’s desire.

4. Reverse Direction of the Sea Breeze

According to science, winds blow from the sea towards land in the daytime and vice-versa in the evening. But, it incident happen reverse completely in Puri.

It is an astonishing fact but it is beyond true that no bird or plane flies above the temple, and there is no scientific explanation to back the theory up.

6. The Puzzle of Colossal Sudarshan Chakra

The Sudarshan Chakra atop the main dome of the temple is 1 ton in weight and 20 feet in height. It is unknown how a colossal chakra was brought atop of the dome without any mechanical help but only with human help. One more, the Chakra was designed in a way that it is visible from every direction of the city, Puri.

The Sudarshan Chakra is installed in a magical way (architectural mystery) that it faces towards every visitor irrespective of the direction the visitor gazes it from.

The way of preparation of prasadam makes you surprised.

The prasadam is not prepared in a conventional way that we prepare at home or anywhere else. The temple follows a unique 7 pot way to cook with firewood. One vessel is placed over another till it reaches the count No – 7. The matter of surprise is that the food at the topmost vessel cooked first and the rest vessels follow a similar order.

It is a mystery or the grace of Lord Jagannath, the quantity of prasad prepared in Puri Jagannath temple is never spent wasted or insufficient for followers to visit in the temple. The temple savors every devotee with maha prasadam irrespective of the numbers of devotees every day.

The prasamdam or bhog for Lord Jagannath and his siblings is prepared with Ganga Jal/water. Puri and Ganga are far apart. But, Ganga flows inside the kitchen in Jagannath temple where the bhog or prasamdam is prepared every day with 7 pot tradition and Ganga Jal. The river is not seen outside of the kitchen.

It is beyond our logical mind but it is true that after every 12 years the old idols get disintegrated manually and buried below the new idols. The idols are made up of neem wood and they remain massed until the completion.  They disintegrated on their own after 12 years when new idols replace the olds.

Every year Ratha yatra takes place in Puri in June (Aasdhar month in Bengali calendar) and millions of devotees gather to pull the rope of chariots of Jagannath, Balaram, and Subhadra. During the festival, their deities are dressed in golden attires (by weight it is to 208 Kg) which is known as Suna Besha. It is believed that a person who pulls the rope of the chariot will not suffer from rebirth but get ‘Moksha’ (liberation) and earn a boon from Jagannath deva.

Roughly back 700 years, there were six rathas or chariots (3 + 3) to celebrate the parade or yatra on this day. the yatra was completed in two ways.

The first one was from the puri temple to the Balagandi channel, and after crossing the channel via boats the second phase of yatra took place from the edge of the channel to the Gundicha temple. On the way to the main shrine of Puri Jagannath temple,  Jaganath, Balarama, Subhadra take rest for seven days in Mausi Maa temple (Ardhashosini’ temple) and take their favorite food, the Poda Pitha (a sort of baked cake). Then they return to their abode which is known as Bahuda Yatra.

It is palpable that every year Puri goes drenched with rain on the festive day of Ratha Yatra without any fail. The same is observed since the inception of the colossal parade.

Needless to say, the facts mentioned above are enough to attract countless visitors, travelers, and devotees of Lord Vishnu to Puri Dham every year.

Atheists can resist the celestial facts of Jagannath temple in the pink of skeptical minds. However, the theists would certainly be floated with the saga of devotion and love for Jagannath, the incarnation of Vishnu; and find every way possible to visit the abode of Pitambara, the Jagannath.

Bonni loves spending time with books. Book is her first and last love of life. She is a content developer and she shares a keen interest in writing blogs and articles on health, travel, fashion, beauty, and astrology. She has been writing for SK Web World for the last three years. As time rolls, Bonni found her interest in reading books in Astrology, Numerology, and Vastu, and she started writing articles and blogs to share her knowledge among the mass.

Stay Connected with Kasturi & Her World of Posibilities